5 Great Quotations about Growing as a Writer 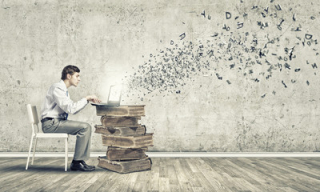 writer is extremely old when he dies, in which case he has probably become a neglected institution, his death must always be seen as untimely. This is because a real writer is always shifting and changing and searching. The world has many labels for him, of which the most treacherous is the label of Success.” - James Baldwin

“If the artist does not fling himself, without reflecting, into his work, as Curtis flung himself into the yawning gulf, as the soldier flings himself into the enemy's trenches, and if, once in this crater, he does not work like a miner on whom the walls of his gallery have fallen in; if he contemplates difficulties instead of overcoming them one by one...he is simply looking on at the suicide of his own talent.” - Honore de Balzac

“So often is the virgin sheet of paper more real than what one has to say, and so often one regrets having marred it.” - Harold Acton

“Always compare yourself to the best. Even if you never measure up, it can't help but make you better.” - Tom Robbins

“Be willing and unafraid to write badly, because often the bad stuff...forms a base on which to build something better.” - Jennifer Egan