Ebooks: The Now of Publishing 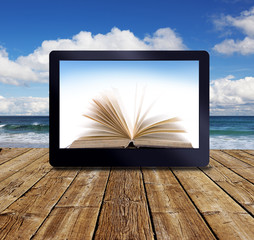 had titled this entry “Ebooks: The Future of Publishing” but after editing changed it to “Ebooks: The Now of Publishing.” My original title might have been accurate in 2010, but since then digital books have come to be a major portion of the book market. They are now the primary way a sizable number of people read books, whether it be a classroom text or the latest airport novel.

More than 1 out of 4 Americans in 2016 read an ebook, according to a Pew Research Center report. And while use of ereaders has declined during the past five years, the reading of ebooks on tablets and smartphones have tripled and doubled respectively during that time. Further, more than third of Americans aged 18-29 read an ebook in 2016; the age group is the largest demographic to do so. Arguably, the habit will remain ingrained as they read books during the next six or seven decades of their lives. Indeed, during 2015, Americans purchased at least 204 million ebooks, according to Nielsen Bookscan and PubTrack Digital. While this has been flat for about three years, it’s still a remarkable number; just obtaining a 0.00005 percent share of those sales would push a title to more than 10,200 ebooks sold and to the top of most Amazon.com bestsellers lists for several weeks. Simply put, ebooks are not just a passing fad.

In addition, while ebooks and paper books largely are interchangeable, that is shifting. The same interchangeability was true of television and radio programming when people began buying TV sets in the early 1950s. But ebooks aren’t paper books any more than television was radio; they’re two different mediums for relaying information and entertainment. Today, ebooks can play videos and audio while linking to vast amounts of additional information, a limitation of paper books. And, just as television altered radio (How many dramatic programs are broadcast on your favorite AM or FM station anymore?), so ebooks are altering and shaping the purpose and function of paper books. The latter increasingly is the realm of celebrities and authors who are big names in their genres. Paper won’t die for many years to come, but like radio vis-à-vis television, its days as the primary way people read stories and nonfiction will wane.

Authors – whether novelists or nonfiction writers – who want to sell their titles in the years ahead will need to do so on digital platforms. And though precisely how ebooks will evolve storytelling or the presentation of information remains to be fully seen, authors need to learn the basics of ebook formatting now to both cash in on this market and to be prepared to take advantage of it during the next decade.