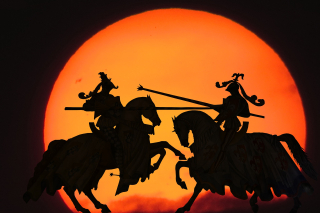 developing your story, you’ll want your characters to face a number of challenges or conflicts. One of the most basic of them is man vs. man. In this conflict, the main character finds his goals jeopardized by another individual: attempting to capture an escaped convict, an shootout with an outlaw, an argument with one’s lover.

At its basest, man vs. man conflict is just two people taking on one another, with our hero usually winning. At its best, this conflict can symbolically test competing ideas and ethical solutions. A character represents one approach to a problem while the other represents an alternative path. All too often, these representations are reduced to simplistic views of good and evil. But by showing each characters’ motivations and needs, the story’s theme gains depth while the dramatic tension soars.

A good example of man vs. man conflict occurs in the movie “Star Trek II: The Wrath of Khan.” The story clearly revolves around two people: Admiral Kirk (the protagonist) and Kahn (the antagonist). The motivations of each are given: Khan wants revenge upon Kirk for marooning him on a planet that then underwent an ecological disaster and that killed his wife. Kirk feels a responsibility to protect the civilized universe from Kahn, a disposed dictator and product of genetic engineering he had defeated several years before. They play an extensive game of cat and mouse with one another. In the end, Kirk wins because his motivations are not based on revenge but doing what his right by others.