Opt for scene over summary when writing stories 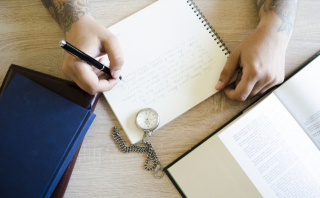 often when novice fiction writers put together a story, an editor will mark whole paragraphs or sections as “Show don’t tell!” or say it was underwritten. In such cases, the writer likely has penned a summary rather than a scene.

A scene shows; it is dramatic action. In contrast, a summary tells; it is narration. Scenes almost always are preferable to summaries for fiction.

Every scene should center on a character attempting to obtain a goal with conflicts increasing the tension and suspense throughout it. The character’s efforts are played out in real time, moment-by-moment; it is visceral. Consider this brief segment from a scene:

Heading past the cinnamon bush, Birray’s scent overpowered the spice, and Koorana wondered why no one else seemed to notice it. The Gangan Comet hung bright in the sky, as they met.

“I couldn’t wait to be alone with you,” Birray said to her, the pitch of his word conveying a bewitchment.

“Nor I with you,” Koorana said. Her pupils flashed.

Birray took her in his arms. She nestled her head against his chest, as he caressed her back. A footfall crushed the ferns a few feet beyond them, and suddenly Birray let her go.

A summary, however, is compressed time. It usually is reserved for more cerebral information, making it an ideal approach for nonfiction, especially journalistic reports.

There are times when summary should be used in fiction. For example, there are events that the reader needs to know but aren’t important enough to detail every single moment of. This is particularly true when describing the characters’ general circumstances, such as when establishing the setting or passing of time:

The days went by, and Birray waited for school to resume. As the humidity rose, so the light also lengthened until the sky remained a dancing red even when bedtime came. Then, imperceptibly, the summer light reached its peak, and darkness slowly reclaimed the days, even as the air thickened with moisture, turning every step into a difficult labor.

Summary also is useful when listing the major incidents over a period of time for a very minor event in the story:

Each day was the same as the other. First the stakes were pounded into the next green patch of swamp, then one by one the hadrosaurs were led and chained to their new plot, always arranged in a spiral and spaced so the tail of one never touched the head of another. Next, the muck of their previous day’s feeding ground was turned and redistributed so that the devoured swamp ferns would regrow evenly. All of this took from early morning through late afternoon to complete and was repeated day after unceasing day.

Still, summary should be used minimally in fiction. You’ll almost always want to opt for a scene, treating it as a mini-story.