Home Archives Profile
What if your book topic already has been done?
Affirmation: A negative view of your writing abilities never will lead to a positive manuscript. 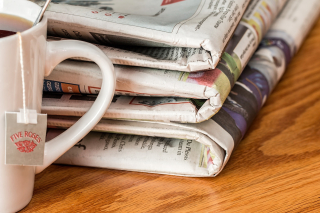 when everyone touts social media, never underestimate the value of using mainstream media to get word out about your book. Indeed, there are plenty of benefits of getting an article in a newspaper or magazine and an interview on the radio or television.

First and foremost among them is free publicity that reaches a lot of people. While the reach of newspapers, magazines, radio and television certainly is not the same as in the pre-Internet age, it is still is seen by a sizeable number of people, and at least a few of them will be interested in your book. In addition, mainstream media articles invariably appear online and so are tweeted and shared using social media, which only expands your reach to your target audience.

Mainstream media coverage also gives you credibility. A bias against self-published books still exists (though it’s decreasing) but that vanishes for your book when articles about you and your book appear in print or are broadcast. Because mainstream media deemed you rather than someone else worthy of coverage, others will take this respect from the gatekeeper as meaning you are worthy of their respect, too.

The respect from this publicity can lead to additional opportunities to sell your books. You may be contacted by those organizing events related to writing or to your book’s topic. You might garner additional coverage from competing news outlets or from local bloggers. You can use the fact that you received coverage as a selling point to get your titles into bookstores or other retail outlets that sell books related to our topic.

Lastly, such popularity helps build your author’s platform. It gives you items to post on your blog and website and articles to tweet or share via social media. Doing this in turn leads to more followers on various social media platforms and more addresses on your email list.

No time spent working on and sending out a press kit is wasted so long as you generate one article or interview from it. Speaking from personal experience, coverage in mainstream media sometimes alone is enough to propel my books to No. 1 in sales; when combined with a good social media campaign, it’s a guarantee that my book will top Amazon.com’s charts.