Home Archives Profile
Use bridge to transition from flashback to present
How much more can we take? Gage vs. gauge

Avoid anachronisms in stories set in past 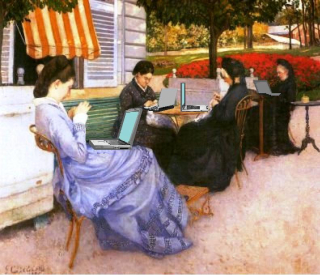 the problems of living in our era of fast-paced technological change is that we don’t have a good sense of when such products that are such a common part of our lives today actually existed. Should a writer not do the proper research and so include a device common today in time period in which it did not exist, that object is an anachronism.

While typically a modern day object placed in the past – such as a desktop computer in the 1960s – a number of different anachronisms can appear in one’s writing. Among them are:
g References to places that didn’t exist at time of the story (Ex: Using the USSR in a story set in 1916)
g Juxtapositions of people who could not have met (Ex.: Julius Caesar and Jesus could not have met as they lived close to a half-century apart.)
g Affiliations and organizations from a later time (Ex: Using the United Nations in a story set in 1939)
g Indirect evidence of technologies that did not exist at time of story (Ex: Radiation from an atomic blast in a story set before 1945)
g Misplaced breeds of domesticated animals (Ex: A golden retriever during Roman times, as the dog was bred only after guns were invented).

There are a number of good reasons to avoid these incongruities. The first is to maintain believability, as they break the verisimilitude of a story. While some readers may not notice the mistake, enough will, and at least one or two of them will point out to the rest of the world that you got it wrong. Secondly, as an author, you should strive to be historically accurate. In the past, sometimes anachronisms were used in stories to make a point; today, however, historical realism generally is preferred.

Need an editor? Having your book, business document or academic paper proofread or edited before submitting it can prove invaluable. In an economic climate where you face heavy competition, your writing needs a second eye to give you the edge. Whether you come from a big city like Dallas, Texas, or a small town like Pleasure Bend, Louisiana, I can provide that second eye.