Questions to ask yourself when plotting a story 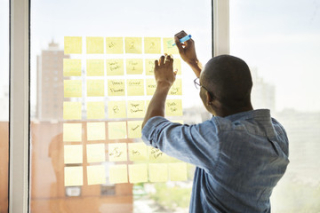 developing a plot for your story, there are several key questions you ought to ask yourself.

First and foremost, ask yourself what is the story’s dramatic situation or central problem. This is the conflict that sets the story in the motion. It could be the arrival of alien spacecraft, the announcement in the Civil War camp that they will march into battle the next morning, or a positive result on a pregnancy test. Science fiction writer Robert Silverberg defines a dramatic situation as “…a zone of inevitable opposition of powerful forces that emits ever-widening reverberations until it is neutralized somehow in a way that creates understanding, insight and harmony.”

Next, ask yourself who is being hurt by this conflict and why they are being hurt. Whoever is affected by this this dissonance is your main character. It could be a local official trying to prevent panic now that a clearly alien spacecraft has landed in the village square, as that is his duty. It could be a young soldier who never wanted to enlist but was talked into it by his friends, yet believes killing is wrong. It could be the college student who tested positive for pregnancy but isn’t in a relationship and has dreams of a career. Often writers will say good fiction is character-based because the story ought to be about a character who has a difficult decision to make rather than the dramatic situation itself. In many cases, writers start imagining a story by thinking about the main character’s conflict.

After determining your story’s main character, ask yourself how that character will deal with this conflict. Ideally, this involves “ever-widening reverberations” of that dramatic situation, or in short, a thickening of the plot. Perhaps the local official calms the crowd, which was led by a person who lost the last election for the official’s spot. Now the local official’s motivations center not just on fulfilling his duties but on maintaining his power in the community. The plot further thickens when an unidentifiable device rises from the alien spacecraft and begins to hum menacingly. Now the local official’s difficulties have returned as the crowd doubts his reassurances. Through the story, the character should have to deal with the multiple conflicts, each one growing worse than the other; often this is referred to as rising action.

Lastly, ask yourself what can possibly resolve the main character’s conflict. As Silverberg explains, you must “bring manners to an end point” and “restore the universe’s harmony.” This is the climax of the story. The main character ought to make a difficult decision that resolves the conflict. Perhaps the Civil War soldier decides his belief in not killing is more important than loyalty to one’s friends and country and so decides to desert. Possibly the pregnant woman decides that despite the pleas of the man who impregnated her to marry him and her friends’ advice to get an abortion that she instead will give birth and raise the child on her own. While the character may face new problems arising from the solution (How will the Civil War soldier survive if he flees out West? How will the woman take care of the child while she is in school?), all that matters is that the personal conflicts facing the main character be resolved as it relates to the dramatic situation (Will the soldier go into battle or not now that marching orders have been given? Will the woman keep the child or not now that she is pregnant?).

Need an editor? Having your book, business document or academic paper proofread or edited before submitting it can prove invaluable. In an economic climate where you face heavy competition, your writing needs a second eye to give you the edge. Whether you come from a big city like Providence, Rhode Island, or a small town like Gay Head, Massachusetts, I can provide that second eye.