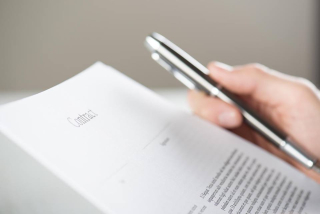 putting together a book or any other publication, writers follow a process that typically includes brainstorming (coming up with the story idea), outlining, writing a first draft, and revising. The final step in this process is final form, or formatting the manuscript.

This step usually was only done once the text had reached the exact version that the writer wanted. The manuscript then would be sent off to an editor or literary agent in hopes of getting it published. Advising writers how to place their manuscript in final form was simple, as most editors and others in the industry generally followed what was known as manuscript form.

Today, final form is not so simple. With the widespread advent of self-publishing, formatting is less about getting the manuscript in the way that an editor or lit agent prefers to see it but in the way the author wants it to appear when published as a book. Compounding this is that often the book will be published in both paper and ebook, meaning multiple formatting or final forms are required for a single manuscript. Being aware of the elements that going into formatting both a paper and an ebook is a good idea when writing, as you can think about how you might divide the text into chapters and subsections, which fonts you’ll use, and so on.

Many writers often try to place their manuscript in final form as penning the book. That’s easy to do with the advent of the computer. The theory such writers hold is that doing this will save them time. Sometimes that is true. As working with clients, I’ve found that if they plan to format their manuscript as writing it, then they should do so for an ebook. If you do the paper book first, you’ll have to undo a lot of formatting to get it into ebook form, whereas there’s less work going the other way (from a manuscript formatted for an ebook into paper book form).

Need an editor? Having your book, business document or academic paper proofread or edited before submitting it can prove invaluable. In an economic climate where you face heavy competition, your writing needs a second eye to give you the edge. Whether you hail from a big city like Miami or a small town like Cold Brook, New York, I can provide that second eye.