How to establish your own writer's voice 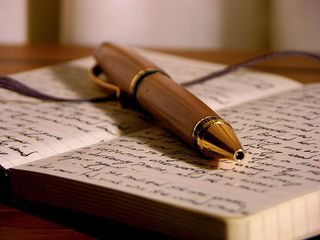 how you can identify some writers by the way they write? That’s because they have a distinct voice.

Each writer sounds unique because each of has our own world view. Someone who is cynical likely is to write in a cynical style. He accomplishes this by creating rhythm and diction, by shaping sentences. These stylistic techniques combine to create a certain pattern or texture to one’s writing.

For example, Arthur C. Clarke’s writing often has been described as prophetic, not just because of the predictions it makes but because of the voice he exudes in his writing. Consider this passage from his short story “The Possessed”: And now the sun ahead was so close that the hurricane of radiation was forcing the Swarm back into the dark night of space. Soon it would be able to come no closer; their gales of light on which it rode from star to star could not be faced so near their source. Unless it encountered a planet very soon, and could fall down into the peace and safety of its shadow, this sun must be abandoned as had so many before.

The voice is prophetic due to its soaring tone and the lofty, sweeping way the subject is handled. Many of Clarke’s stories contain such passages that make him unique from Asimov, Bradbury, Gibson and other science fiction writers.

Every writer has his own voice. But some writers – especially beginners – sound flat and all too similar. Some would say those writers haven’t found “their” voice yet, and there’s some truth to that. But more likely the problem is they haven’t fully mastered the craft of writing. They understand well the mechanics of writing and plotting but lack the self-confidence to let their own voice be heard. It is as if they are a apprentice painter, able to follow the rules of their Renaissance master but unable to add the brush strokes necessary to give the work a unique quality.

There are a few ways you can strengthen your voice:
• Fine-tune sentences – Make sure they clearly convey what you want to say. Many writers have a distinct voice because their sentences carry a subtext. To accomplish that, every word must be selected for a specific purpose.
• Use expressive words – The words you select ought to be to the point, should be evocative, should focus the reader toward a certain feeling or message.
• Avoid imitating another author’s voice – You wouldn’t talk like someone else, so why write like someone else? Even if you “mastered” another writer’s voice, it wouldn’t be original.

A final note: Don’t confuse with “point of view” or “verb tense” with voice. Sometimes terms overlap. And while point of view and verb tense are important elements in your writing, “voice” in this discussion refers more to your word choice and how those words are arranged to create a certain impression.

Need an editor? Having your book, business document or academic paper proofread or edited before submitting it can prove invaluable. In an economic climate where you face heavy competition, your writing needs a second eye to give you the edge. Whether you come from a big city like Pittsburgh, Pennsylvania, or a small town like Cluttsville, Alabama, I can provide that second eye.