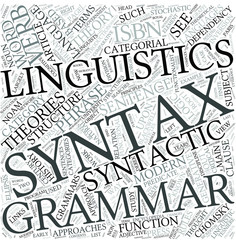 you’ll want to vary the syntax, which is the pattern of the sentence’s words – that is, the order of the parts of speech within a sentence.

But an English sentence can be structured a number of different ways. For example, you might use a Verb-Subject pattern, as in Run Shelly! in which Run is the Verb (or what the Subject should do) and Shelly is the Subject (or who the sentence is about).

If you don’t vary your syntax, the writing will sound stilted. In addition, your sentences will be about the same length, resulting in paragraphs that sound monotone. It would be like ordering a banana split and getting a big bowl of only vanilla ice cream. Varying the syntax adds flavor and texture to your writing.

Because of the English language’s grammar, most of your sentences will be S-V-DO. But placing modifiers in different locations of the sentence can add textual variety. For example, you could write Concentrating on the work before her, Aunt Janie sewed the button on my shirt in which Concentrating on the work before her is a modifier showing how Aunt Janie (the Subject) is sewing.

Of course, there are times when you may not want to vary the sentence structure. One is for rhetorical effect. Consider these lines from Martin Luther King Jr.’s famous “I Have a Dream” speech:

I have a dream that one day this nation will rise up and live out the true meaning of its creed: “We hold these truths to be self-evident: that all men are created equal.”

I have a dream that my four little children will one day live in a nation where they will not be judged by the color of their skin but by the content of their character.

The reason those lines work despite the unvarying sentence structure is because by repeating certain key words and the same sentence structure, they have a rhythm to them, much like a poem or song lyric. Just as importantly, the wording in the sentences evoke powerful images that tap into our emotions and humanity.

Another instance in which you may wish to repeat the same sentence structure is when developing a character. If you wish to show that the character has a dull personality, perhaps that person will speak this way. Don’t overdo it, though, as after a while this can grate on a reader.

Ultimately, you want to vary sentence length (and structure) in your writing. The rhetorical effect of repetition works best when it is not overdone.

Need an editor? Having your book, business document or academic paper proofread or edited before submitting it can prove invaluable. In an economic climate where you face heavy competition, your writing needs a second eye to give you the edge. Whether you come from a big city like Ventura, California, or a small town like Big Ugly Creek, West Virginia, I can provide that second eye.