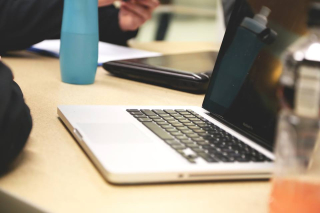 selecting which word to use, our aim is off. Usually, this can be resolved simply by thinking a little bit more about exactly what is meant and then changing that word.

When our aim is off on more than a word but a whole passages of text, writers commit the error of “subjective tension.” This is “the difference between what you mean and what you actually say,” an apt phrase coined by science fiction writer Samuel R. Delany.

Usually this difference amounts to something that is humorous or campy, which can break the tone of your piece. Some examples include:
• Her jaw fell to the floor.
• He jumped through the door.
• She strained her eyes as looking through the window.
• He twisted up her face.

Of course, not of these images literally can take place. Hence, the suspension of disbelief that a reader brings to a story is broken.

A variant of subjective tension is the gag detail, which is “an unnecessarily unrealistic detail that blows the story’s credibility,” according to CSFW’s Sarah Smith, who devised the term. An example of a gag detail she gives is, “I can accept a Neanderthal going to Harvard, but a Neanderthal with a middle name? Gag.”

Sometimes, though, subjective tension and gag details can be used to great effect. They can help form the repertoire of jokes in a humorous story, as in Douglas Adams’ “The Hitchhiker’s Guide to the Galaxy.” If done right and maintained throughout the entire piece, they can create a deliberately campy and fun story, such as the 1960s “Batman” television series.

Need an editor? Having your book, business document or academic paper proofread or edited before submitting it can prove invaluable. In an economic climate where you face heavy competition, your writing needs a second eye to give you the edge. Whether you come from a big city like Grand Rapids, Michigan, or a small town like Frying Pan Landing, North Carolina, I can provide that second eye.