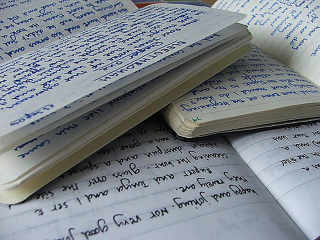 entry originally was written for and appeared on EatSleepWrite.com.

Sometimes in our efforts to succeed, we overdo it – While training for a marathon, we run too many miles at first rather than build our strength, or while baking a cake we add too much of one ingredient in hopes of spicing it up. The results usually are disastrous and require that we start over.

So it is with descriptive writing as well. As striving to deliver vivid, engaging writing, we actually can make our writing sound worse.

There are a number of ways that writers can overdo it. The most common errors among novices are:
• Fat writing – This involves using extraneous and showy verbiage. Writing instructors often refer to it as “purple prose.” For example, Galen’s mysterious, stygian eyes gawped in utter awe at Samantha’s pure, angelic being.
• Foreground to – Writers shouldn’t draw attention to some object in their story purely for artistic effect. This might mean you’ve written a poetic-sounding but meaningless image, such as gelatinous sneer. Doing so actually slows the story by decreasing the dramatic tension.
• Pushbutton words – Rather than actually describe one’s physical responses, the writer resorts to overused words intended to invoke an emotion, like dance as in And so the slow dance of their love began. Typically they don’t invoke any response other than a yawn.

Just as you want to know how to improve your descriptive writing by recognizing techniques that can make your story more vibrant, so you also want to be aware of when you’ve gone too far. It’s like a football or a basketball player being aware of the out-of-bounds line.

Need an editor? Having your book, business document or academic paper proofread or edited before submitting it can prove invaluable. In an economic climate where you face heavy competition, your writing needs a second eye to give you the edge. Whether you come from a big city like Modesto, California, or a small town like Hard Scratch, Iowa, I can provide that second eye.