Think of your story as if a stage production 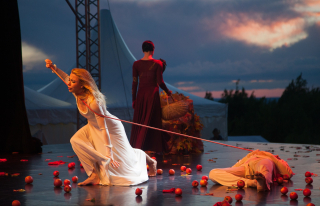 plotting your short story or novel, thinking of it in terms of a theatrical or film production is useful. That’s because theater and film relies heavily on physical action to make the story work; beginning novelists and short story writers sometimes lose sight of the necessity for action and so get lost in their word-heavy medium.

Four terms can help you think of your novel or short story as if it were a theatrical or film production center on staging.

The first is onstage. These are events that the reader directly reads and experiences, as if a real-time observer or an audience member in a theater. Writers always should be aware that readers consider onstage events dramatic and more important than those that they don’t see.

Events that they don’t see but that are part of a story are said to be offstage. These events can include narration, a reminiscence, an indirect quotation, or even something that happened long before the story occurred and so is inferred.

The challenge for writers is to know when a part of their story should be onstage or offstage. Generally, narration should be kept to a minimum in a story as it is not dramatic action. A reminiscence is fine so long as is it doesn’t take up too much space in the story and so long as it is important by informing the reader about the character or helping advance the plot. When inferring an event, characters usually need to be limited to very specific and brief statements about it so that readers aren’t lost wondering what is being discussed.

Often the problem with a slow-moving story is that too much of the onstage action actually needs to appear offstage. A good example would be eliminating a scene that happened several years before the story occurs and instead simply have the characters refer to it through specific references. If you shift onstage action offstage, you destage the action, a term coined by CSFW’s Steve Popkes. In rewriting, editors who recommend that onstage action be deliberately revised so that it appears offstage often use the term unstage to describe this revising.

Need an editor? Having your book, business document or academic paper proofread or edited before submitting it can prove invaluable. In an economic climate where you face heavy competition, your writing needs a second eye to give you the edge. Whether you come from a big city like Harrisburg, Pennsylvania, or a small town like Zig-Zag, Oregon, I can provide that second eye.