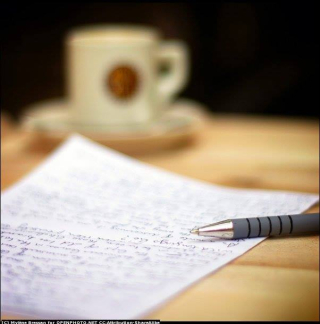 a car salesman has a shoddy vehicle to sell, he tries to distract you from the flaw by pointing out something that’s good – like turning up the radio and raving about the great sound system so you don’t hear the engine knock.

Sometimes writers do exactly the same thing. When this occurs, they’re guilty of handwaving. A term coined by American writer Stewart Brand, handwaving is “distracting the reader with verbal fireworks to keep him from noticing a severe logic flaw.” For example, in the “Star Trek: The Original Series” episode “Miri,” our intrepid explorers discover an exact duplicate of our planet several hundred light years from this region of the galaxy. The device of a duplicate Earth allows a landing party to encounter a world on which only children live, as a life longevity project from 300 years before has gone bad, ensuring that once youth enter puberty they contract a fatal disease.

Unfortunately, exactly why there is a duplicate Earth several hundred light years from here is never addressed in the episode. It’s an interesting concept but highly improbable. It piques viewers’ interest – much in the same way that one waves their arms – and covers the issue of exactly why our crew would come across planet with humans on it. Once thought about, the unexplained flaws of a duplicate Earth merely so we have a planet of humans to interact with undermines the episode’s credibility.

To fix handwaving, you’ll need to dump the plot device and instead address the logical flaw. That may require some major rethinking of the plot or character and possibly even a significant rewrite of sections of the story. In “Miri,” that would mean not visiting a duplicate Earth. Instead, the humans on the planet might be descendants of a colonial expedition sent out from Earth three centuries before.

Such rewriting may take a lot of work, but the effort is worth it. After all, any reader eventually will hear that knocking engine in your story…

Need an editor? Having your book, business document or academic paper proofread or edited before submitting it can prove invaluable. In an economic climate where you face heavy competition, your writing needs a second eye to give you the edge. Whether you come from a big city like Sacramento, California, or a small town like Intercourse, Pennsylvania, I can provide that second eye.