Home Archives Profile
My poetry book now on Nook, other e-readers
How to make your writing show rather than tell

Conflict: The heart of every story 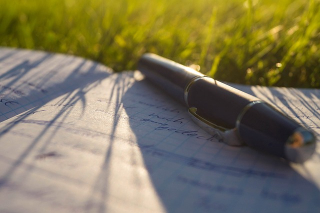 Forster’s quotation is apt because a good plot is about at least one character under adversity. Conflict typically arises from the characters’ perceptions, needs and wants. As each character has an urgent personal agenda, your plot really is a synthesis of its individual characters’ efforts to achieve their agendas.

As these conflicting agendas intersect, each character faces adversity. For Kirk, the Organians aren’t receptive to his idea, then finds himself in the middle of an occupation army and ultimately is captured by Kor. For Kor, an ammunition dump is blown up (by Kirk) and then the Organians are uncooperative when Kirk escapes his cell. For the Organians, they first feel the pressure of Kirk and Kor and then watch both sides become increasingly violent toward one another on their home turf.

There are five primary types of conflict that your characters can face:
• Man vs. nature - When the forces of nature, such as storms, deserts and volcanoes, that hinder a character from achieving his objective
• Man vs. man - When two individuals struggle against one another to achieve their objectives, such as Kirk and Kor
• Man vs. society - When a character or small group challenges the mores and values of their culture or its political institutions
• Man vs. God(s) - When an individual or a small group fight God or the gods
• Man vs. himself - When a character has an internal struggle because of conflicting desires, wants and needs

When developing conflict in your story, follow these guidelines:
• Maximize conflict by pit two forces against one another – This either can involve opposites facing off (as with Kirk and Kor) or involve an internal conflict.
• Every scene should present the main character with a problem - If this doesn’t happen, there probably isn’t much point to the scene.
• Conflict should allow the character an opportunity to change the course of events - Adversity alone rarely is enough to carry a story, though it may help create reader sympathy for your character.

Need an editor? Having your book, business document or academic paper proofread or edited before submitting it can prove invaluable. In an economic climate where you face heavy competition, your writing needs a second eye to give you the edge. Whether you come from a big city like Seattle, Washington, or a small town like Uncertain, Texas, I can provide that second eye.