Home Archives Profile
'Windmill' book reading set in Minneapolis
Get it right: Its vs. it’s 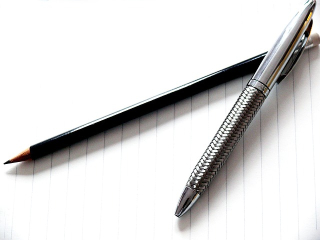 the quickest ways to ruin a story’s texture is to repeat the same word between sentences and paragraphs. For example:

Koorana quivered as Birray’s scent grew stronger than ever before, so strong that the teenager thought it entwined with her very blood. For a teenage male with such wide shoulders he possessed the sweetest smile, she mused, and so tall, too. He motioned to look up, and Koorana realized everyone else in the tent was standing. She broke her stare, quickly stood. Averting her eyes to the dirt ground beneath them, Koorana vowed to concentrate on the service, but a moment later she allowed herself one last look at Birray. He was still staring at her and winked. The teenager turned back, happy, and even in the dim light could see the flowers adorning the altar.

Notice how some words, particularly “teenager” and its variant “teenage” are repeated? The paragraph could be improved by eliminating two of the three uses of that word, perhaps by replacing the first “teenager” with a synonym such as “adolescent” and simply using the pronoun “she” for “The teenager” in the last sentence.

Gustave Flaubert recommended never using a word more than once on a single page, but I consider that a bit extreme. After all, sometimes repeating the word is necessary for rhetorical effect. Consider this passage:

“How could organs as complicated as the eye or the ear or the brain of even a tiny bird ever come about by chance or natural processes?” the gobena continued. “How could a family?”

The gobena’s speech hearkens to that of a revivalist and thus seems more real when the phrases “Do you realize how complex” and “How could” are repeated.

Another acceptable practice for repetition is when using an invisible word, like “the”, “and” or “said”. In the preceding passage, “the” was used 11 times, though you probably didn’t notice it.

Beyond these instances, however, avoiding repetition of words is advisable.

Need an editor? Having your book, business document or academic paper proofread or edited before submitting it can prove invaluable. In an economic climate where you face heavy competition, your writing needs a second eye to give you the edge. Whether you come from a big city like Spokane, Washington, or a small town like Looneyville, Texas, I can provide that second eye.